“Before you get a dog, you can’t quite imagine what living with one might be like; afterward, you can’t imagine living any other way”. Caroline Knapp

Buckie came into our lives in July 2009 when he was only 12 weeks old. A little puppy. A pure bred springer spaniel & the runt of the litter. We spent (Liam mostly) the best part of two years training him from scratch. He listens to all his commands, sit, lie down, he even wont eat until we tell him to. Once I poured his food out and left him in the back kitchen of our house and went off to town to do the shopping and when I got back he was still sitting there staring at his food waiting for me to say “ok go”. Ah sure he’s a great dog isn’t he?!

We headed off last week for a trip towards Cork, destination Ballycotton. We stopped off along the way at Dick’s campground in Ardmore for a couple of days. It’s dog friendly, located right on the beachfront & packed with camper vans most of which had a dog so we parked up the camper & headed straight for a walk on the beach with the kids & Buckie. The sea looked so beautiful we all decided to take a dip & as the beach was fairly quiet because it was overcast & windy, we let Buckie off the lead for a little while for a swim too. We do this all the time on our own familiar beaches and never worry about him taking off and this day he did stay with us, playing in the sea until we got out to dry & put our clothes back on. Then he legged it, he did a runner, I could see the boldness in his eyes as he looked behind him towards us. He ran straight back up to the campsite and pissed on every campervan parked all along the first row at Dick’s campground. There was us whistling & calling him from the beach but he didn’t give a shit. Well actually he did do about 5 or 6 shits along the top of the beach where all the other dog walkers were with their lovely good dogs on leads. So there was me, running along behind him bagging his poo & apologising to the good dog owners with a handful of his shit while Liam & the kids were still calling him from the beach. Then he spotted two girls playing tennis off in the distance down the beach. Buckie sort of turns semi-psychopathic when it comes to balls, he is completely obsessed with fetching them. So off he went, all the way down the beach & jumped straight up to catch the girls’ ball mid air. Liam & I were both mortified and fuming at this stage. The girls thought it was cute & kept throwing the ball for him.

It had started lashing rain, the kids were getting cold so I brought them back to the camper and left Liam to try get Buckie. I only realised when we got back we could see the whole beach from our spot & we were in the second row! Basically the whole of the first and second row of campers got a right show if they were watching. Liam ran over towards the girls who were still playing fetch with Buckie but Buckie spotted Liam & knew he was in trouble so ran away even further. Liam asked the girls if he could borrow their ball thinking if he threw it Buckie would be stupid enough to bring it back to him….nope he kept the ball & kept running so now there was Liam & two girls with tennis rackets running around trying to corner Buckie but he was too cute for them. About an hour later, Buckie started to get a bit tired and slowed down and eventually gave in. Liam got back to the camper shivering & Buckie was very sorry looking with his tail between his legs.

A massive lesson learned there so needless to say Buckie wasn’t left off his lead for the whole rest of the trip. We brought him on plenty of walks throughout the days but we are wondering is this a fair life for a springer spaniel. They’re hunting dogs, the natural hunter in Buckie is there right from when he was born and he had never even experienced hunting before. We’re worried about bringing him along on our trip now. But what do we do with him?! The kids would be devastated if we leave him here. It’s a big ask to have someone keep and mind him for the foreseeable future. He’s just over 9 years old now & showing no signs of calming down yet, I thought surely he would be slowing down a bit by now. With just over four weeks til we leave for Europe we really need to figure this one out.

The next day, we headed for Ballycotton. Liam, being in the lighthouse business knows Eddie the lighthouse keeper there on the island lighthouse. He gave Eddie a call a few days beforehand & said we were coming his way & Eddie invited us out for a trip on the boat to see the lighthouse!

Eddie, one of the last lighthouse keepers stationed at Ballycotton lighthouse

We arrived in the afternoon on a Saturday right in the middle of tourist season. It was such a busy little place, one way size streets for two way traffic with no campsite so we struggled to find a parking space & ended up parking in the village housing estate just so we could take a deep breath. The lady came out of the house we parked outside of & said we would be fine there for a few hours until the carparks emptied out a bit so we went for a little walk to find our bearings and didn’t make it any further than the nearest pub for a pint of Murphy’s stout. When in Cork one must drink Murphy’s! Afterwards, we took a little walk to the pier where there was some teenagers jumping off the quay and so Liam reliving his youth had to have a go too.

The following morning, we explored Ballycotton a bit more, headed to the beach for a swim (wash!) and chilled there for a few hours searching the rock pools, beach combing & made a beach mandala basically killing time until our tour with Eddie that evening. We met Eddie on the pier & we were so lucky to get a special tour of the lighthouse from him. He was one of the last lighthouse keepers on the island until it became fully automated in 1994. We spent the best part of two hours exploring and chatting before we took the boat back to Ballycotton again where we headed straight back to the pub for another pint of Murphy’s and we took Eddie for a drink too where we found out he plays in a well famous Irish band that Liam’s parents would have listened to often. He stayed for one drink and headed off for his band practice. 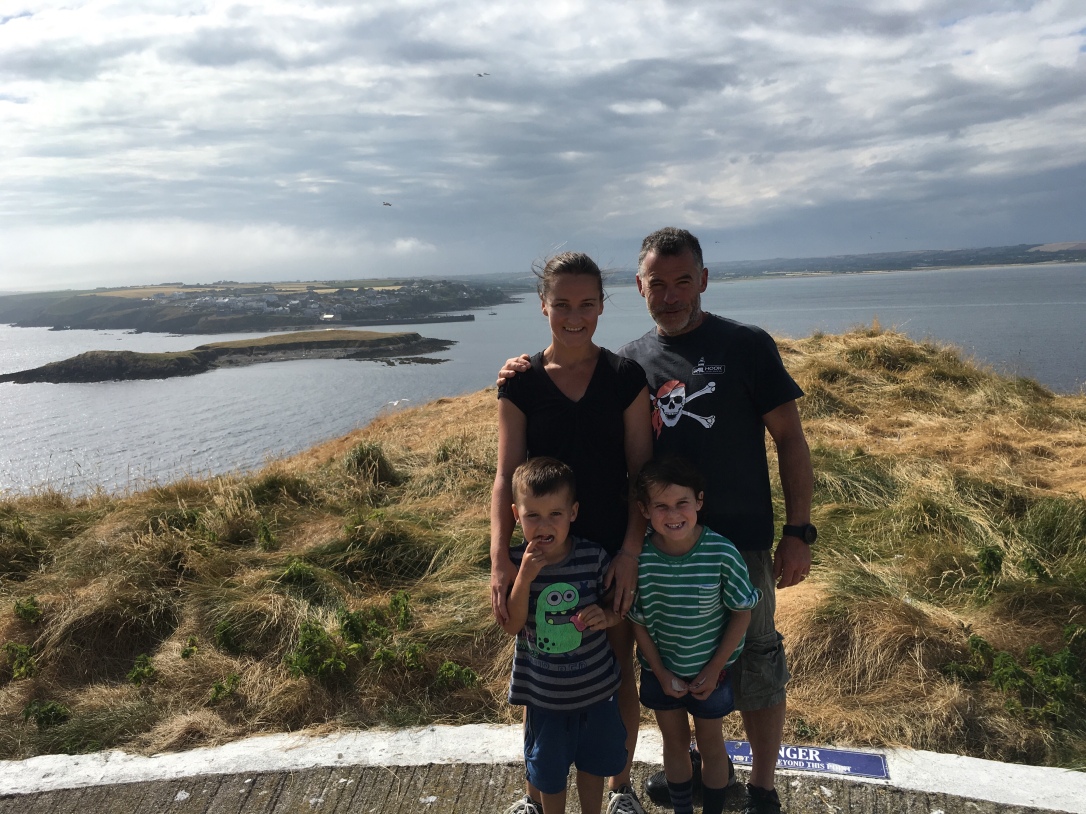 All in all it was a lovely trip, we loved Ardmore and Ballycotton. It was good to figure out more about the camper, we figure we can get three days from our water tank (sinks, flushing, shower) and three days from our two toilet cartridges. We never used up all of our leisure battery but we were very careful with it. We are on the lookout now for a solar panel either a fixed one for the roof or portable which you can set on the ground and connect to the battery. We figure we need at least a 120watt one to cover all our devices, lights, water pump etc.

The round tower at Ardmore, Co.Waterford

Buckie is still in the bad books, he is earning our trust back again & doing as he’s told, he’s cute enough that way. Last night, we even let him off the lead for a while at Hook Lighthouse & he came back to us everytime we called. We are back at the Hook for another few days as Liam catches up on work at the lighthouse and I can catch up on housework between air bnb’ers. In the meantime, we’ve been meeting lots of campers and getting lots of handy tips and advice from them. We met Chris and Marianne from http://www.treadtheglobe.com who have embarked on their van living trip of a lifetime and had great craic with them last night.

Now we are preparing for our next trip which will be next week to Co.Waterford and next weekend to the All Together Now festival which takes place at Curraghmore House in Portlaw http://www.alltogethernow.ie. It will be Alex’s birthday that weekend and the kids very first music festival! The lineup is awesome across 10 stages and there are so many other cool events on for kids too. We are very excited and Buckie is booked into the kennel for this one 😜 Can’t frickin’ wait!

So nice to spend the weekend here in our favourite city Sevilla exploring and catching up with our family who flew in for the weekend. All the laughs, all the flamenco, all the tapas, all the wine 🙌 Thanks for coming over to visit us @olearymayb @siobhanwaters @aine.92 @annunhooked @markiemerc @liam.livinoffthehook See you all again soon 😘☀️💃☘🍻
Watching the mist disappearing into the hills this morning.
Fun in the sun ☀️ We've been making plenty of use out of this amazing saltwater pool at Suryalila retreat center.
Anybody want to come and visit us at Suryalila?! There's loads of yoga retreats to choose from or you can book in as an independent guest and relax and unwind in this beautiful place. Located near Seville, not far from Malaga, Cadiz, Granada airports. www.suryalila.com
Eco the horse doesn't know what to make of the kids dressed as robots in empty Kombucha boxes. @suryalilayoga
We are really excited to be part of the team at @danyadarapermaculture located at @suryalilayoga in southern Spain. Reconnect with yourself and the land on a unique fully immersive three-month eco and wellness experience. The team at Danyadara have put together an amazing eco-building and accredited permaculture design course where participants can live and learn here at Suryalila alongside a creative and supportive yoga community where you can take part in our daily yoga sessions, eat delicious organic vegetarian food, dips in the salt water swimming pool, sauna, meditation, outdoor pursuits, cultural excursions and lots of chats and fun. This is a fantastic opportunity to learn to live off grid, build an eco house, create a garden while studying permaculture and learning about the earths natural cycles. With Jacob @wizard_permaculture Nadia @nadia.glaesner And Liam @liam.livinoffthehook https://danyadara.com/permaculture-design-course-spain/