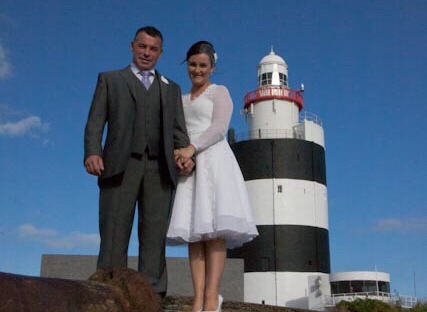 You know there is a word for a person who is into lighthouses? It’s pharologist & the word ‘pharology’ is derived from pharos, the Greek word for lighthouse. In France people call a lighthouse un phare, Spanish people call it faro, and in Portuguese it is farol. In Romania and Bulgaria a lighthouse is called a far, while in Norway it is a fyr.

I’ve met a few hard core pharologists while working as a tour guide at Hook lighthouse in Irelands south east. You would spot them a mile away with their enthusiasm but stood out particularly because they would usually be wearing lighthouse themed shirts or dickie bows and a jacket or hat full of lighthouse badges. They came from all over the world to see Hook lighthouse & to buy another pin for their collection.

We’re now realising we will be those lighthouse fanatics on our camper van travels of Europe! We know quite a lot about lighthouses because of where we’re from and working at one. Hooked on lighthouses you could say. We could never go on any holiday without going out of our way to visit the local lighthouse. This road trip will be no different, we intend to stay mostly coastal & will stop to visit every lighthouse we possibly can along the way.

From the minute we hit the ferry at Rosslare port we will be passing some infamous lighthouses including Tuskar Rock lighthouse off Rosslare. Some other lighthouses we have on our list that we are very excited to see are:

This lighthouse became well known in 1989, through a series of photographs taken by Jean Guichard. One infamous storm happened on 21 December 1989. A front of low pressure coming from Ireland brought gale force winds and huge waves of 20 to 30 metres high which crashed against the lighthouse. The waves smashed through the lower windows of the lighthouse, ripped the front door, flooded the tower and washed away all of the furniture. Photographer Jean Guichard hired a helicopter to take aerial pictures of the storm despite the very dangerous flying conditions. The helicopter made it to La Jument and hovered around for Guichard to take shots of the waves pounding the lighthouse. Inside the tower, Théodore Malgorn heard the helicopter and went downstairs to see what was going on. At that very moment, a giant wave rose over the rear of the lighthouse and Guichard took his world-famous shot as the wave smashed against the tower. Théodore Malgorn, suddenly realising that a giant wave was about to engulf the structure, rushed back inside just in time to save his life. In an interview he said “If I had been a little further away from the door, I would not have made it back into the tower. And I would be dead today. You cannot play with the sea.” La Jument’s poster print has sold well over a million copies, making the Breton lighthouse the most famous  lighthouse print in the world.

We visited Vincents point lighthouse on our very first holiday together in 2009. We flew into Lisbon, hired a car & spent two weeks driving the coast of Portugal to Faro. Our favourite spot by far was the south & south west coast. It was just so unspoiled, secluded and rugged. We can’t wait to head there again this time with the kids and Buckie (the dog!) & witness some of those spectacular sunsets from the edge of Europe.

The Tower of Hercules is an ancient Roman lighthouse in north west Spain. The original structure was built in the 2nd century and after the fall of the Roman empire it fell into disuse was renovated and extended throughout the centuries. It is thought to be modelled like the Pharos lighthouse in Alexandria which was built around 280BC and was one of the seven wonders of the world. It was badly damaged in some earthquakes between 956-1323 and became a ruin but it’s definitely the archetype of most if not all lighthouses since.

There are loads of Celtic and Roman myths and legends associated with the Tower of Hercules and we will definitely be in our element when we finally arrive to this legendary lighthouse.

This lighthouse in the north of Denmark was built in 1899. The shifting sands and coastal erosion are threatening it even though it was originally built 1km from the sea, the coast has been eroding on average 1.5 metres every year. This lighthouse we must see before it is expected to fall into the sea by 2028.

This is the most southerly lighthouse in Germany on lake Constance. It was built in the 1850’s & is known for its clock built into it. The light on this tower has the same sequence as Hook lighthouse & flashes once every 3 seconds. We’re looking forward to viewing the Alps from the top of this one.

I could go on & on there are just so many interesting & beautiful places & lighthouses to see all over Europe. We hope to finish our van life travels in the UK where we will see all of the lighthouses of Trinity House in England, Scotland & Wales in spring / summer 2020.

Hook lighthouse in Irelands south east will always be our favourite though. Not only is it the oldest working lighthouse in the world, it’s where Liam & I met in 2008 when we both worked there. I left when the kiddies came along but Liam stayed and he manages the maintenance of the buildings and operations there and at another lighthouse across the estuary at Dunmore east. A modern day lighthouse keeper I like to think. Irish Lighthouses and other navigation aids are owned and operated by the Commissioners of Irish Lights.

Growing up on the Hook peninsula was idyllic and we were always aware of the operations and changes at Hook lighthouse. I remember when it was fully automated in 1996, the fog horn was taken out around 5 years ago and the light was changed to LED 3 years ago. I never thought I would but I do miss that fog horn blasting loudly twice every 45 seconds & I miss the old light from the 1000watt bulb flashing in our windows, the newer LED lights no longer casts a shadow in our kitchen every 3 seconds.

These days most lighthouses are fully automated and can run themselves so there is no need for a full time keeper anymore however most still have a part time attendant to carry out maintenance works and checks. There are a small few lighthouses still manned across parts of Europe which we hope to come across. We might be lucky to catch the lighthouse keeper on a good day for a sneaky look. 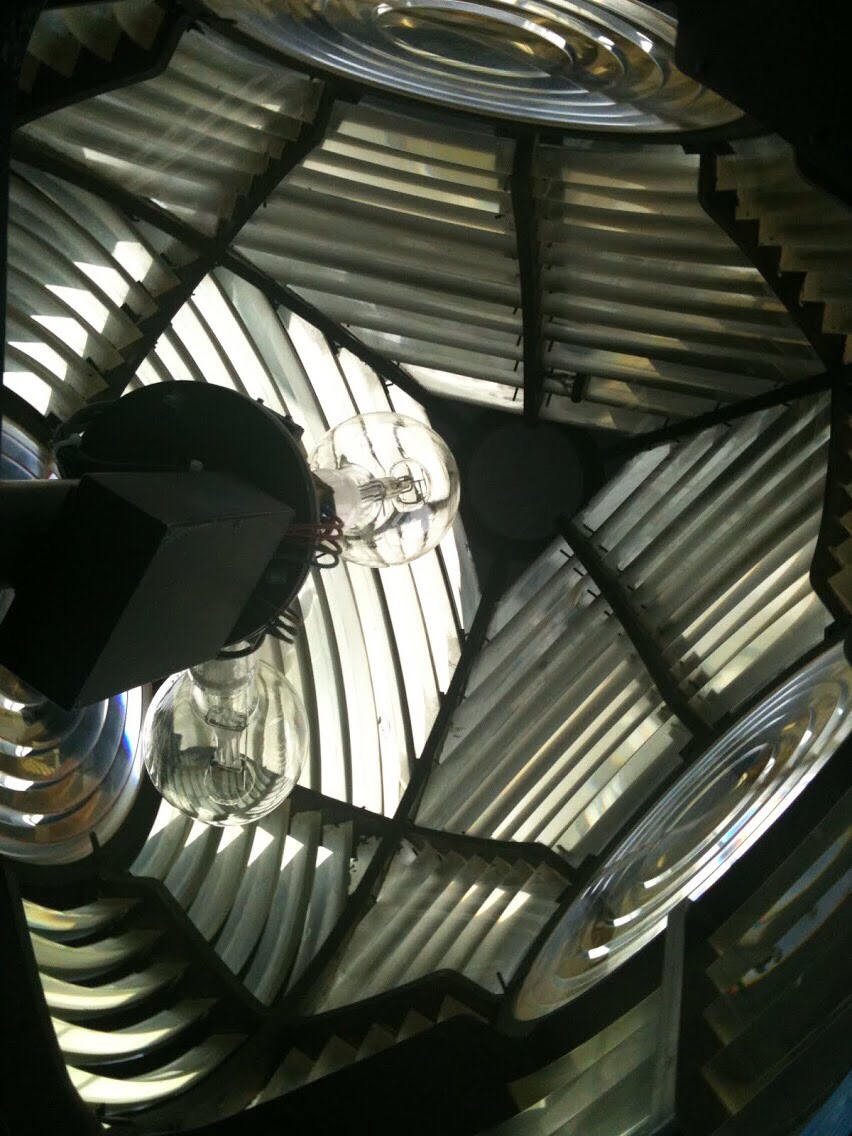 This thing I like most about lighthouses is that they are unique. There are more than 18,600 lighthouses in the world and every single one is unique, they are built and painted differently, they all have their own unique flash sequence and the ones with sound signals all have their own unique fog horn sequence too. They are unique not just physically but in the stories that they tell too. Lots of people have a very romantic idea of lighthouses but really it was probably a very lonely life for keepers at times and of course every lighthouse has their own stories of tragedy & adversity. Still they are a symbol of strength, adventure, challenge, reassurance & guidance.

“To be a lighthouse, you must be strong enough to resist every kind of storm, to every kind of lonliness and you must have a powerful light inside you.” Mehmet Murat Ildan

3 thoughts on “Home is where the light is”

So nice to spend the weekend here in our favourite city Sevilla exploring and catching up with our family who flew in for the weekend. All the laughs, all the flamenco, all the tapas, all the wine 🙌 Thanks for coming over to visit us @olearymayb @siobhanwaters @aine.92 @annunhooked @markiemerc @liam.livinoffthehook See you all again soon 😘☀️💃☘🍻
Watching the mist disappearing into the hills this morning.
Fun in the sun ☀️ We've been making plenty of use out of this amazing saltwater pool at Suryalila retreat center.
Anybody want to come and visit us at Suryalila?! There's loads of yoga retreats to choose from or you can book in as an independent guest and relax and unwind in this beautiful place. Located near Seville, not far from Malaga, Cadiz, Granada airports. www.suryalila.com
Eco the horse doesn't know what to make of the kids dressed as robots in empty Kombucha boxes. @suryalilayoga
We are really excited to be part of the team at @danyadarapermaculture located at @suryalilayoga in southern Spain. Reconnect with yourself and the land on a unique fully immersive three-month eco and wellness experience. The team at Danyadara have put together an amazing eco-building and accredited permaculture design course where participants can live and learn here at Suryalila alongside a creative and supportive yoga community where you can take part in our daily yoga sessions, eat delicious organic vegetarian food, dips in the salt water swimming pool, sauna, meditation, outdoor pursuits, cultural excursions and lots of chats and fun. This is a fantastic opportunity to learn to live off grid, build an eco house, create a garden while studying permaculture and learning about the earths natural cycles. With Jacob @wizard_permaculture Nadia @nadia.glaesner And Liam @liam.livinoffthehook https://danyadara.com/permaculture-design-course-spain/